Coming to the end

I am gradually coming to the final chapters of the second book of The Milleran Cluster so I will provide only a few details.

At this point the leader of the rebels against the Ceorans (bosses) tried to escape from Kethix but was attacked by a fleet of the Wesuran Navy.
Posted by Unknown at 8:09 AM No comments:

When does terrorism lead to despotism. According to some news analysts, it happens when something called "mission creep" enters into the scene. It could work something like this: In a vigilant effort to route out possible terrorists a government begins to monitor all suspicious communications and internet traffic. Not knowing which interactions are suspicious and which are not the governmental entity in charge of terrorism decides it is best to monitor all communications. One especially helpful tool is the ability to monitor all social media connections so that the connections to all possible terrorists or potential terrorists can be known. To catch even more possible baddies the government agency decides to monitor any groups is thinks might be related to terrorist activities. This eventually includes any groups that are even remotely connected to speaking or writing out against the government in any form. That is an example of mission creep. What began as limited monitoring of identified potential terrorists has expanded into collecting the data of thousands of citizens for doing anything that could be defined as potentially related to terrorist or anti-government action.

Why should a person care? After all, the average citizen does nothing wrong. Most go to work, go home, follow the rules, play nice, and so on. But with mission creep in action, more and more average citizens get caught up in the net of potentialities. If someone knows someone who is the cousin of someone that once wrote a nasty remark about the president on a chat site, all those people may become unwitting suspects.

So it is on Kevutu. The few people who have rebelled against the tyranny of the control of the ceorans (bosses) have caused panic in the government leading to martial law and their own version of despotism. The Grand Council of Ceorans, the primary governmental body for the planet, has been disbanded by a subset of the council called the Directorate. They have called for martial law and are chasing down any citizen they believe to be related to the terrorists (known as freedom fighters in their own land).
Posted by Unknown at 8:04 AM No comments: 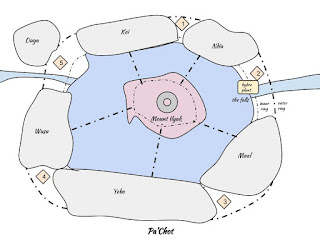 This is the map for the planetoid to be known as Pa'Chot. From Kevutu it is considered to be one of the Seven Sisters or bright stars in the night sky. Each of the gray areas is a Canton or self-sustained community. The central circle is Mount Milnak (see earlier post). The entire structure (except the top of the mountain) is underground including the water between Mount Milnak and the Cantons.
Posted by Unknown at 7:45 AM No comments:

It was a scene that could have been taken from any number of action movies. A truck with dark tinted windows is followed by the LA police department. They had received word of a recent murder and the suspect was reported to be driving just such a truck. The police surrounded the truck and forced it to pull over. Not being able to see the driver they became afraid for their lives and took up positions behind their car doors with pistols drawn. The driver was told to step out of the car slowly with hands raised. In the next moment the door of the truck opened. Immediately pistols were cocked and rifles were aimed and ready to fire. From the cab of the vehicle appeared a woman. She raised her hands and came around to the front of the truck. When she came around to the front it became obvious that she was quite pregnant and scared. All it would have taken is one itchy trigger finger or one perceived threatening move by the mother-to-be and a simple case of mistaken identity could have become a terrible tragedy.

Mistaken identity is also the theme of my current chapter. The Chotians believe that the Kevutians are on their way to have come to their planet to take them home. The Kevutians, on the other hand, think they are the only beings in the universe (know any other creatures like that?) and are, therefore, shocked when they first encounter the Chotians. They believe they are under attack by unknown beings and choose to get away without making contact. Like many cases of confused intentions the consequences of not trying to understand the other person can lead to disastrous results.
Posted by Unknown at 8:14 AM No comments:

Writing science fiction sure creates some unusual challenges not encountered in everyday life. Maybe that' why I enjoy it so much. How often are you encountered with problems like communicating with an alien race in your day-to-day job? That is the problem I face in my current chapter. Having a few Kevutians literally fall into the laps of a new race of humanoids creates many difficulties but perhaps the greatest is the need to communicate. I came upon the idea that maybe instead learning each other's languages they could use and develop sign language. Since they are both humanoid it would make sense that many of the shapes they can create with their hands might have similarities. My idea was bolstered by a rather unusual source. Keep in mind I am speaking with tongue-in-cheek about this source.

A person named W. H. Mumfrey has put himself forward as being an expert in aliens that have come to Earth and live among us. He goes out of his way to point out that these aliens do not reveal their secrets and yet he has been able to compile a complete book revealing their secrets. Ignoring this inconsistency, let's play along. He has written a book entitled The Alien Invasion Survival Handbook. This book purports to tell us all about the aliens that are planning to invade us poor humans so that we may be better prepared. On his section on language, he tells us that these aliens communicate through "airborne electrical signals." According to Mumfrey, some aliens have actually been captured and are kept in secret research facilities. Evidently they are not much different than monkeys in this case because they have been taught to do sign language in the same way that primates have. Maybe these aliens have just tapped into the Planet of the Apes series on their interstellar Netflix. In any case, the aliens have learned some basic sign language in a short period of time.

I ask you, what better confirmation of my idea could that be??
Posted by Unknown at 8:06 AM No comments:

The Dark Side of Publishing

Recently, when a friend asked me if my first book was available as an e-book on Amazon I said yes. In the past, whenever the print version was available I immediately worked on the electronic version (it's harder to format than you might think) and got it ready to go. Electronic versions, once formatted, can be distributed quickly. Usually within a week my e-version would be ready and would go live shortly thereafter. I have been working with a site called Smashwords and they have been very good about getting books out to a lot of electronic distributors. One of those distributors had been Amazon–the name most people think of when they want to buy a book online. Lately, however, Amazon has started dragging their enormous feet on the ground and causing small tremors as they do so. They don't seem to want to distribute from places like Smashwords anymore. Why?

Because they have started their own ebook publishing and distribution serve, of course. OK, so what? Well, they require exclusivity of their others. Something no one else would dare do. Any author that wants to be part of their service must commit to a minimum of 90 days whe and are they will not allow anyone else to publish the work. This means that people with readers other than a Kindle or Kindle app will not be able to read it. So, the question for authors as it stands now is to go with a wide range of distributors like the Kobo reader, Apple iBooks, and so on, or to go with just Amazon and be chained to them like a prisoner on a chain gang.

I chose the chains for at least 90 days. Let's see if it makes any difference.
Posted by Unknown at 7:34 AM No comments:

I have been having some success in getting my book into several of the local bookshops around my hometown of Maynard MA. I decided to try my luck at some bookstores in nearby towns so I headed on over to Concord MA. You'd think that I had traveled from Kevutu to another planet. I entered the Concord Bookshop and asked if they carried books by local authors. From the first look from the guy behind the desk I knew I was in for trouble. He had this look like: "Oh no! Not another one!" I guess there are a lot of writers in Concord. Yea, I know it's the town of Thoreau and Emerson and all the rest but if they had been given that kind of look from their booksellers we might have never heard of them. Maybe everyone who thinks she is the new Thoreau or Emerson has moved to Concord and now hounds the local bookstores.

When I was directed to another person in the shop I was given a piece of paper stating the policy guidelines for getting books on consignment. The first line told me that I would have to pay a $100 fee just to be considered. The paper explained that the money was necessary for paying for shelf space and the time and energy it took to put that book on said shelf space. Really? I want that job.

Is this what bookstores have come to? They are losing sales from customers so they are going to make it up by dousing struggling authors. I know I'm no Thoreau or Emerson but I'm no Trump or Buffet either. I'm lucky if I make a couple of bucks from a single book sale. How many books would I have to sell to justify paying a $100 shelf fee. What if all the bookstores adopted this policy?

The internet may ring the death knell of bookstores and may be the only saving grace left for authors.
Posted by Unknown at 7:33 AM No comments:

I just returned from a week's vacation in Provincetown. My current chapter of Book 2 involves a sea battle between the Wesuran corp and the freedom fighters of Kethix so it was fun to look out across Cape Cod and imagine the battle taking place in those beautiful blue waters.

I am happy to report that I got a positive review on Amazon for my first book. I will quote it here.

"This book captured my imagination. I loved the author’s creativity, character development, philosophies, story line and even some poetry mixed in too. Dialogue, flow and imagery all move nicely through the book and kept me wanting to see how the story would unfold and resolve. The fantasy of a different world and time were simply a backdrop to the real story of people solving life's challenges and problems."
Posted by Unknown at 7:54 AM No comments: